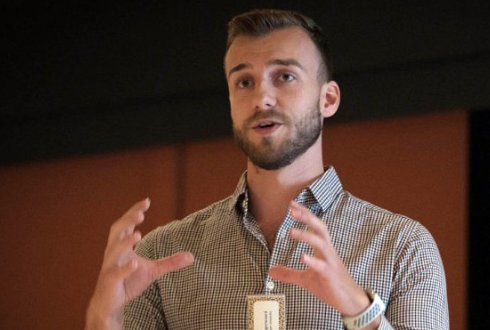 “I see myself as an experienced project manager”

A new method to study the effect of ageing on mitochondrial health in skeletal muscles and a better understanding of the molecular mechanisms behind ageing. These are the outcomes of research by TiFN PhD fellow Bart Lagerwaard. On Friday March 12, 2021, he successfully defended his thesis (online of course) ‘at’ Wageningen University & Research.

“When I graduated, in 2016, I was just developing a taste for research,” says Lagerwaard, who completed both a BSc and an MSc in Molecular Nutrition at Wageningen University & Research. “I really enjoyed working on my MSc thesis at the Human and Animal Physiology chair group. I investigated a new, fast and non-invasive method, using Near-infrared Spectroscopy (NIRS) to measure oxygen metabolism in muscle tissue.”

Tiny energy factories
Oxygen is, perhaps, the most important component used by the mitochondria inside muscle cells to produce energy. The rate at which these tiny energy factories return to their rest-oxygen consumption state after exercise gives an indication of how they function. “The faster, the better,” the scientist explains. “And they probably start working less well with age.” Lagerwaard’s PhD research aimed to obtain a better understanding of what happens inside muscles during ageing. He learned, from a clinical trial among younger and older men with similar physical exercise levels, that physical exercise cannot prevent deterioration of muscle mitochondria. “But the good news is that we found new leads for nutrition and lifestyle interventions,” he stresses. “The connective tissue around the muscle, for example, plays an important role in growth and repair. This is often overlooked in muscle ageing research.” The scientist also investigated a novel protein modification: propionylation. In his thesis he explores the role of this process in muscle physiology and ageing.

Believe in yourself
Lagerwaard looks back fondly at the past four years: “Every day was a challenge, and I really enjoyed that! As a PhD fellow you mostly work alone – an issue exacerbated by lockdown. But it helped that I worked with several PhD fellows in one overarching project. I had regular exchanges with them, and with my supervisors. I also enjoyed the congresses where I could share outcomes and exchange ideas with other scientists.” The researcher believes doing a PhD made him more persistent and independent. “I learned to not give up and believe in my own capabilities; a mindset I’ll need as my career progresses.”

Experienced project manager
The project also turned Lagerwaard into an experienced project manager. “As a PhD fellow you often have four sub-projects running at the same time; trials with volunteers for example, experiments in the lab, and students to supervise. Good planning becomes essential, not just to your own success, but to that of others as well.” Lagerwaard is currently working on more publications originating from his research, in addition to his PhD thesis. “And I am teaching physiology courses and methods that we use in physiology research. I’m really enjoying myself, so I’m not in any hurry to stop.”