Combining different textures in one food product enhances palatability. This is the conclusion from the TiFN PhD project by scientist and chef Marco Santagiuliana.

Marco Santagiuliana was studying food science technology at Padua University, when he was notified of this position at TiFN in Wageningen. “I wanted to complete my MSc here, because Wageningen is the first university in the field of food sciences. I’m indebted to the Erasmus (student exchange) programme for giving me the opportunity to do so”, he explains.

Time to reflect
Before entering university in Padua, Santagiuliana, a self-confessed gourmet, had already graduated from The School of Culinary Art and Hotel Management of Recoaro Terme. “For several years I worked as a part-time chef, in simple local restaurants but also high-end Michelin star restaurants”, he says. A chef’s life suited the young Italian, but he felt something was missing: “I wanted to have time to reflect and think more deeply about food taste and texture, rather than the long days and pressure of a professional kitchen.”

So it was not surprising that when Santagiuliana saw the vacancy for a PhD to investigate the effects of combining food textures, on expected and perceived sensory properties and liking, in different consumer groups. “The job was made for me: it combines a variety of disciplines and has an applied character rather than focussing on hardcore physics”, he smiles.

Creating differences
In his PhD project, the young Italian soon learned that, when designing heterogenous foods with texture contrasts – think of granola with yoghurt for example, soup with pieces of vegetables and cheeses with bell peppers – creating and highlighting differences in the hardness of components is the most-promising approach. However, when adding particles, it is the size of the particles that most affects the type of sensory descriptors perceived during consumption, while the intensity of perceived sensations is determined by the hardness of the particles added. “Visual particles provide cues that can change the consumer’s expectations of a product, generating positive arousal”, Santagiuliana explains.

Valuable
Although he recently became a father, with all the sleepless nights that entails, the young scientist’s energy and optimism are undimmed. “During my time as a PhD I learned so much: about product characterization in the lab, how to organize consumer studies, and communication, presentation and leadership skills; valuable qualities and experiences to take with me in my career.”

The industry has already shown interest, not only in the insights generated in the PhD project, but also in Santagiuliana. “My contract at Wageningen University runs until the end of January 2020, but I have already accepted a job offer from the Vegetarische Slager (the Vegetarian Butcher).” 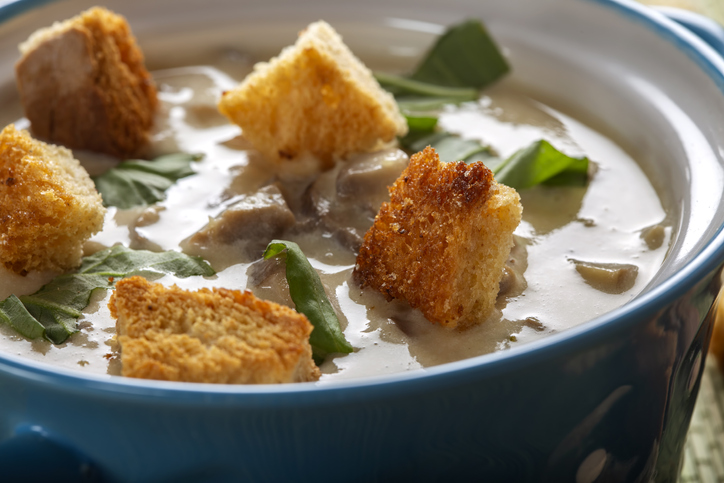