12 December 2016 – New tools and insights into inhibiting the formation of biofilms by spoilage-causing Lactobacillus plantarum are the result of the research by Mónica Fernández Ramírez. The TiFN PhD fellow successfully defended her thesis on 2 December 2016, at Wageningen University. Her work provides new leads for the development of more-effective cleaning and disinfection strategies in the food industry.

Biofilms consist of microorganisms attached to a surface and embedded in a protective matrix of extracellular polymeric substances. Within a biofilm, micro-organisms are protected against cleaning and disinfecting agents. Transfer of living biofilm cells to foods can result in quality decay or even worse.

Motile and non-motile bacteria
Fernández Ramìrez investigated the formation of biofilms consisting of single or multiple strains of Lactobacillus plantarum, a micro-organism often used in food fermentation but that can also cause food decay. “Many biofilm-formation studies focus on pathogens and motile bacteria, which have structures like flagella to help them reach surfaces”, the PhD fellow stresses. “But non-motile micro-organisms such as Lactobacillus plantarum should also be studied, as they have different mechanisms of biofilm formation.”

In her experiments, she applied both quantitative PCR and next-generation sequencing based on detection of strain-specific alleles in biofilm growth models. “Next generation sequencing allows high-throughput sequencing”, she explains, “and through natural variations of a region in the genome of each strain they can be successfully identified and quantified.”

Proteins and surface colonization
The PhD fellow discovered that, in the case of the single-strain biofilms, proteins and/or proteinaceous material played an important role in surface colonization and extracellular DNA, as components of the biofilm matrix. Lysis led to inactivation of cells, but the destroyed cells also helped in creating the biofilm.

Stress response
Performance of individual strains in dual-strain biofilms was highly influenced by the presence of the secondary strain; in the same dual combinations as floating cells this was not the case. Putting the microorganisms under stress conditions, such as high temperature and omitting the mineral managanese, affected the relative abundance of each strain as well as release of eDNA.

The strains dominating the biofilms in static conditions – which occur in, for example, dead ends or crevices of materials – were not the same as those dominating in biofilms developed in dynamic, flowing conditions (pipes). “We investigated the genome content of the dominating strains to identify genetic factors that potentially contribute to strain-specific, competitive, biofilm-forming capacity”, explains the PhD fellow. All the single, dual and multi-strain biofilms contained a considerable number of viable L. plantarum cells, representing a potential source of contamination.

Instructive and inspiring
Fernández Ramìrez, who is looking for a research position in the food industry, considers her time as a PhD fellow at TiFN as valuable for her career. “The close interaction with the bacterial genomics platform has been very instructive”, she says. She also enjoyed the expert meetings in which both industry partners and colleagues from the Food Safety and Preservation theme were involved. “I learnt a lot about my own subject as well as related topics such as spores and predictive modelling.” 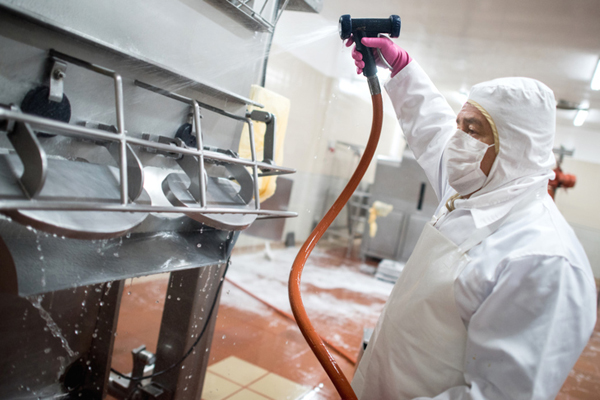