10 February 2017 – It is likely that age-related degeneration of the immune system can be reverted or prevented by nutritional interventions. But translational research is essential – from animal to human and young to elderly. This is the key message from the PhD work of Dr Adriaan van Beek, who successfully defended his thesis on 17 January 2017 at Wageningen University.

The increase in the elderly population has become a major burden on public health care and economies. DNA damage is considered to be the major origin of age-related changes in the body. “The immune system becomes deregulated with ageing, often characterized by systemic, low-grade inflammation”, explains Van Beek. In a mouse study, he investigated the underlying processes and mechanisms. He also studied the effects of nutritional and microbial interventions on ‘ageing markers’, such as thickness of the mucus layer, the diversity of the microbiota and the number of immune cells present in several immune organs.

Supplementing probiotics
The PhD fellow demonstrated that supplementing with probiotics had different effects in old mice compared to young mice. “In the young mice we found almost no effects”, he says. “In old mice, one probiotic strain had a positive effect, resulting in a thicker mucus layer. Two other strains, however, had negative effects; the mucus layer from the old mice became thinner and there were more signs of inflammation in the body.” Van Beek’s findings underline the importance of translational research in delivering outcomes, appropriate to the target segment of the population, that are both safe and effective.

Van Beek also investigated the effect of a tryptophan-restricted diet, and found changes in microbiota composition and immune cell development. “We found a near-complete absence of B cell precursors in the bone marrow following this diet”, he says.

Providing a clear picture
Van Beek is happy with the outcomes of his work, which he carried out together with researchers from different groups in Wageningen, Groningen and Rotterdam. “We combined a wide range of techniques, from immunological analyses to measuring the mucus layer and the diversity of microbiota. Such a multidisciplinary approach is essential in providing a clear picture of the processes involved.”

The relatively lengthy duration, of the animal experiments, was challenging, as was coordinating a project with so many different contributors “It required strict planning, mutual agreements and clear decisions.” 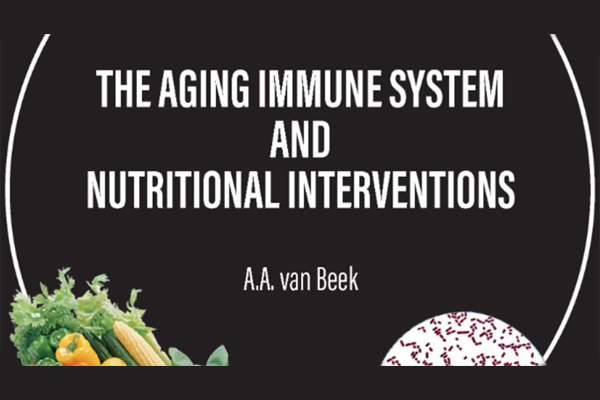