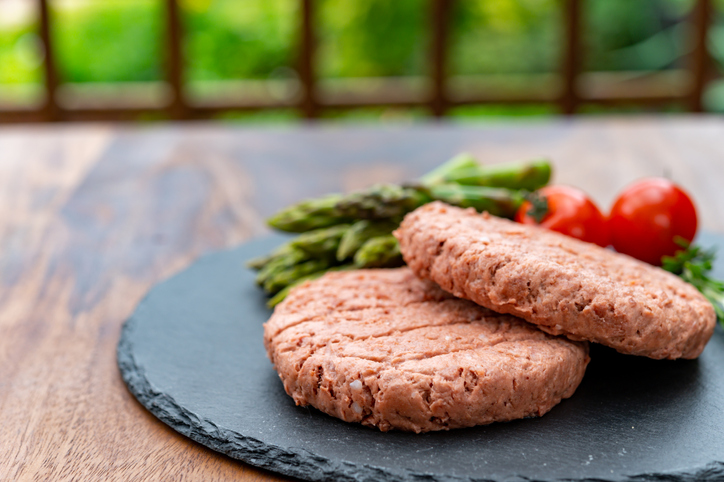 TiFN doctoral student Marco Santagiuliana had just defended his PhD thesis when he was offered a job at The Vegetarian Butcher: a leading, innovative, meat-alternatives company.

He has been working there since February 2020, guiding their product development, and scoping new ingredients and partnerships. “As a PhD fellow I have learned that issues are best solved with a structured approach.”

The company trouble-shooter: that’s what his colleagues have started calling him. “I joined the company as a senior developer but, along the way, we discovered that I could play an advisory role in the research and development team,” says Santagiuliana. “So now I have become lead technologist, creating strategies for the targeted improvement of products produced by The Vegetarian Butcher.”

Rapidly expanding
A challenging task, as the company’s portfolio is rapidly expanding, now covering more then 20 products in almost as many markets, from vegetarian nobacon and hotdogs to vegan nochicken nuggets. The Vegetarian Butcher also provides the plant-based Whopper to fast-food chain Burger King. Founded in the Netherlands in 2010, the company now sells its products in about 20 countries around the world.

Holistic view
Apart from his advisory role, the food technologist is closely involved in building new partnerships with, for example, ingredient suppliers. “My PhD at TiFN was a great opportunity for my own development as a professional but also in the areas of communication, presentation and leadership skills,” he explains. The knowledge and expertise he gained on ingredients and their functionality, including sensory aspects, proves its value every day. “I have adopted a holistic view that I feel is crucial for the market success of a consumer-oriented company such as The Vegetarian Butcher.”

Combining food textures to boost palatability
In December 2019, the young Italian successfully defended his PhD thesis: Exquisitely heterogeneous: combining different food textures to boost palatability. He found that, when designing heterogeneous foods with texture contrasts – think of granola with yoghurt for example, soup with pieces of vegetables, or cheese with bell peppers – creating and highlighting differences in the hardness of components is the most-promising approach to increasing palatability. However, when adding particles, their size most affects the sensations perceived during consumption, and how they are described. The intensity of perceived sensations is determined by the hardness of the particles added.

Exciting journey
Santagiuliana is looking to the future with enthusiasm and positive energy. “The Vegetarian Butcher is growing very fast, providing many opportunities for my personal development as well as making a small but significant impact on the global protein transition. I’m happy I can be part of this exciting journey.”